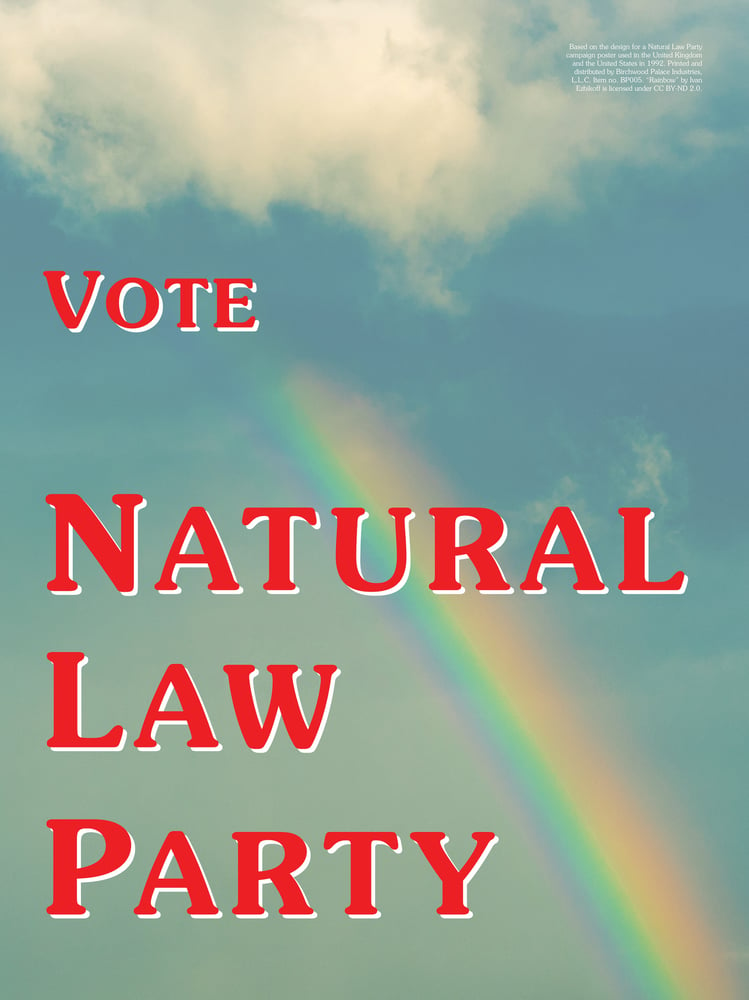 Dr. John Hagelin, a physicist and president of the Maharishi University of Management in Fairfield, Iowa, ran for president three times under the NLP banner. The party's fortunes in the U.S. peaked in 1996, appearing on ballots in 48 states and receiving 110,000 votes. As of the early 2020s, the NLP has mostly disbanded on a national level in the U.S., though the party nominated candidates for governor, lieutenant governor and U.S. Senate in Michigan as later as 2018. Dr. Hagelin now serves as president of the David Lynch Foundation.

This poster is based closely on a design widely in use in the United Kingdom and the United States in the early 1990s. In 2020, Birchwood Palace Industries purchased an original 9" x 12" poster on a popular online auction site, originally acquired by the seller from the photo files of a regional newspaper in the United Kingdom. We have created our own reinterpretation of this unusual artifact of American and British electoral politics. The original poster (in a yellow frame) is pictured in the images on this page.

The dimensions are 16" x 20", and the poster is printed on a semi-gloss, fingerprint resistant 10 mil (0.25 mm) paper. It ships rolled in a cardboard poster mailer direct from the factory in North Carolina. Product number BP005.

Birchwood Palace Industries does not specifically endorse the official policies or positions of the Natural Law Party, nor is it affiliated in any capacity with the NLP, the Maharishi University of Management or the David Lynch Foundation.